After Reading Defeat, Allardyce Points The Finger Of Blame!

A clearly angry Doctor Evil was in no mood to pull his punches after the game. Raging about defeat in a free scoring game, he said:

"That's what the delusional fans were asking for. We controlled the game for 40 minutes playing the West Ham way and look where it got us. Had we just kept it tight, stolen a goal and kept a clean sheet we would all have gone home happy. Instead all that silly bugger talk about playing the ball on the ground cost us."

"Where was the ball when Noble lost possession which led to their first goal, that's what I want to know? On the ground. Don't ask me why he was fannying around with the ball like that. That's not what I want him to do. Get it, offload it. Get it, hit it forward. We were a goal ahead. We were winning the game. Keep the ball in the air and up the other end of the pitch and the opposition can't score can they? But that's not what West Ham fans want is it? They want entertainment. Well there were six goals today so presumably they feel that they have had good value for money. They have to be pleased with that don't they?"

"People are querying my substitutions. That shows how little my critics know. People are saying I should have brought on Lansbury for Noble. Why exactly? Can the boy defend? We conceded two goals in the second half anyway, it could have been even worse had I not moved Tomkins forward to anchor the midfield."

"Kevin Nolan was excellent again. He isn't a creative midfielder. That's not his game. He is a goal scoring midfielder and his header set up our opening goal. That's what he is in the team for."

"Reading were a bit lucky to be honest with you. Their fourth goal was offside, everybody in the stadium could see that apart from the officials and the penalty was dubious in my book. So had Maynard scored with his chance we could have won the game 3-2 and everybody would have been happy with that. But our forwards are going through a bad patch unfortunately and that is costing us. I have the facts, and let me tell you that over the 90 minutes we were the better team, as we have been in all our recent games. Sooner or later we will get the breaks and the rewards we deserve. Providing we cut out this playing on the ground crap."

"We are third in the table and clear of the chasing pack so everybody has to be pleased with that. Remember, I took over a team that finished bottom last season so, as I keep saying, third place represents outstanding progress. The so called experts are falling over themselves to praise Harry Redknapp because Tottenham are in fourth place but how many places have they improved this season? Not as many as us. Bottom to third is better in my book than fifth to fourth. You see, I have the facts, and it's facts like that which really matter. We are getting there and Bolton wasn't built in a day."
Posted by Hammersfan at 18:24

At the end of the day you don't bring a defender on for a midfielder when your losing.

Why do you constantly go on about the Hammers?
I thought this was a QPR blog????
I don't care what is going on in the Championship (at the moment!)
Please let's just talk about the Grs' great result today.

Well said HF, but it's not even funny anymore. We are in deep sh**t and no-one has a clue what to do about it! That is the truth of the matter. I hope I am wrong, but I don't see how we can get promoted through the playoffs. Not playing this kind of football. Not without, somehow, finding a way to dominate the midfield.

No chance of this happenning with the man in charge, whose great invention in life is how to build a team without midfielders.

The only thing Allardyce's teams can hope to attain is make it hard for them to get relegated. The trouble is, we are not at that stage yet. We need to get promoted first. And even if we do, most us would prefer to see our team play football and risk going down rather than watch this rubbish every weekend.

Just to avoid confusion, I think I have typed an extra star in the word sh*t in my previous post. You should really find a way to allow uses to edit their posts HF. Even Dale allows that; I mean when his site is up and running.

I'm totally gutted at today's events really was positive going into the game and the first 40 mins really were a joy to watch I thought, what a brilliant advert for the great game although after that we just went on to advertise all the things that are wrong with our club. Faye looked immense up to the 40th minute and then he just disappeared. Nolan was busy and then fell away, Vaz te started fading in and out and cole looked back to the player we've been seeing for the past few weeks, no substance. When the pressure was on we capitulated and this club is rotten to the core when it comes to confidence, it's fragile beyond belief and I don't know how were supposed to change that. Truly gutted right now

To be honest may be better off simply stay in the Championship. If we are to get promoted (don't know exactly how), we are going to come straight down again with 1. The manager in charge 2. The players we got 3. The kind of football being play.

19:49 Sav this is a blog by blogger - you can't edit blogger blogs. WHTID is not a blog - I suggest you check your posts before you post them. Obviously whatever line of work you're in doesn't demand any level of accuracy.

21:12 don't you read anything about our club? we have rather large debts which is why we need to go up to get a share of the EPL / SKY pot.

21:45 it must be soul destroying for HF. Having the moderator facility on means you have to physically allow posts that slag you off, I imagine it's pretty time consuming too. Oh well it's all part of the the Game. Just like the fun we had with him and the stolen WHTID URL Mwwwwaaaahhhaaahhhaaa

That was good fun. Without it, I would never have known that Dale's site was down. And the threads were fun and generated lots of traffic. Mwwwwaaaahhhaaahhhaaa

As for having to allow posts that slag me off, it's great. Every time I see one from you I think, "Still trapped by The Game". Mwwwwaaaahhhaaahhhaaa

How the hell did we win that! First half was daylight robbery and was dreading the 2nd half. Until the substitution that is. I don't know your team but what the hell was that about. I still think you will get more points than us in the next 6 games. We have 3 difficult away games and we won't win them all. So you can still make the 4 points up. May the best team win, as long as it is us. Royals fan

No way above is a royals fan. Pathetic. 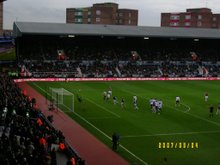 The first of nine. Tevez, you're a god! Great pic Andy!
Blog Directory for London